Dave Latchaw is the one pianist who has been enthralling us by going LIVE on facebook in these lonesome times of Corona. His piano style is distinctive and replete with improvisation and instantly challenges and changes the mood of the audiences.

Besides being a teacher and a composer, he has abundant affection for his dogs. An alumni of the Berkeley College of Music, Dave has been doing funk gigs, teaches piano and composes music. His recent album ‘Reflections’ is an amalgamation of his finest solo compositions. We at fnbworld.com bring some elements of Dave’s musical journey.

Ravi V. Chhabra:  Your childhood memories of family, music, initiation into music and specifically the piano?

Dave Latchaw: My earliest music memories are playing improvised piano concerts at the age of 3 or 4 for my grandmother, when we would visit her farm. My great grandmother played piano and my parents liked music. Dad was into opera and classical music and my mom liked a variety of styles but was drawn to pop music of the 1940’s and 1950’s.

By the time I was 10, my folks bought a piano and had me start piano lessons. I had basic piano lessons for a few years. I was also  playing the Tuba in the school band. When I was a Freshman, I heard the school jazz band for the first time and I was immediately hooked. I was always into music, but this was the first jazz I ever heard.

I was lucky to study with Scott Stroman while in high school. Scott became the Director of the London Jazz Orchestra. Our school program led by Peter Bottomley was amazing, especially considering it was in a small town in Indiana – Kendallville. I am sure I was drawn to the sound of the piano and the accessibility of the instrument. It is so simple and complex at the same time. The piano layout makes perfect sense, black and white, low to high. One can basically get results early on playing the piano yet spend a lifetime on trying to master it.

RVC: Which musical instrument attracted you most and still does besides piano and why?

DL: Great question. It would depend on what mood I am in. Usually, if I am listening to music, it is hard for me to not be a student of what I am listening to. Trying to absorb the music in my own way. I am drawn to guitar players when I am studying improvisation. Allan Holdsworth and John McLaughlin are two that I am consistently listening to. In some ways, the guitar and piano are similar in the musical roles they play. The guitar has always been kind of mental force for me on how to play. The piano makes more sense. If I were going to learn to play another instrument it would have to be drums. The two instruments I think everyone should be familiar with regardless of their chosen instrument would piano and drums. 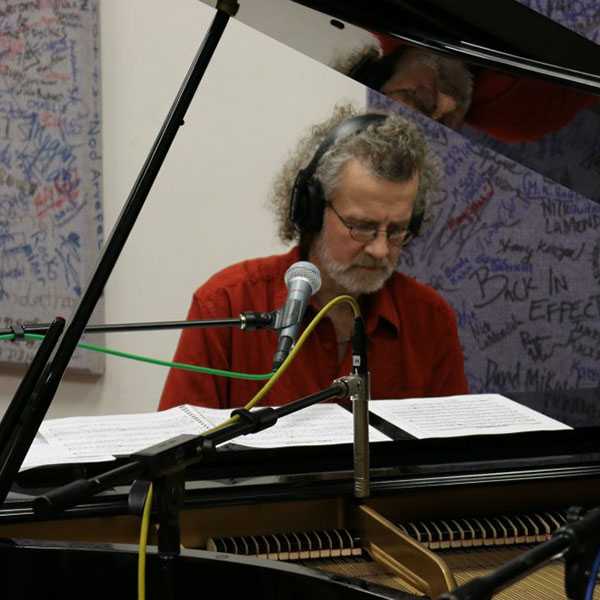 RVC: You have been into all sorts of music be it funk, jazz or piano solos. If you were to select one of these?

DL: That is like asking me which of my pets is my favourite. I love all these styles for different reasons. I do not consider myself one kind of musician or another. I am an improvising musician that likes playing many styles. I just react to the musical situation I am in. When I was in the Fort Wayne Funk Orchestra all my keyboard parts were initially improvised and over time became more specific. That was the same when I played with the Scottish Rock Band called The Heat. I would improvise my parts based upon what I was hearing then eventually the part would become more concise. Any band I have been in that did covers were intentionally not trying to sound like the recording. I never really have been into replicating a specific recording. I do respect people that are into doing it. So, if I would have to pick one style, it would be whichever would allow me to improvise the most.

RVC: Your favourite classical piano composers and in avant-garde jazz?

DL: When I was in college, I would play a lot of Mozart. I thought I had a bit of feel for his music. I did enjoy playing Bartok as well. When I was at Berklee, I studied with Bruce Thomas. He was one of the few piano players to ever play with Ornette Coleman. I sure that has been a huge influence. As far as a favourite classical composer and avant-garde jazz artist, that is hard to say. I have not been one to say this is my favourite or that is my favourite. It either moves me or it does not. I am pretty binary that way.

RVC: Can you recall how you joined the Berkeley College and how it helped shape up your piano style? Did you learn reading and writing music?

DL: Berkeley was a great experience. My time out there was very beneficial. I was able to read and write music before I went there although those skills improved while there. Studying with Bruce Thomas was amazing. He had played in Ornette Coleman and Chet Baker bands. I am sure my time with him has influenced me. He gave me many tools to develop my own thing.

RVC: Could you spell out some popular piano styles and briefly describe them for our readers?

DL: That I would just google!

RVC: I have been watching and enjoying you go LIVE on social media – is it planned or do you follow your mood?

DL: I do a Happy Hour Solo Piano program where I play Gershwin, Cole Porter, Rogers & Hart and artists like that. I also do a Piano Moods show that is usually completely improvised. It is not planned out at all. I just play. It is a music adventure. I try not to judge what I am doing; just create. Streaming this process live has helped me improve my skills of improvisation. This situation is kind of like research and development for new music that I will write. I will go back and listen to my show and listen for any ideas that could be developed.

RVC:  Since how long have you been teaching piano and where do you go from here?

DL: I have been teaching music since I was 18 years old, 40 years now. I have always taught and played. I think teaching makes me a better player. I just will keep trying to improve my music skills as an educator and a musician. I am endlessly fascinated and curious about all aspects of music. I feel as much of a student now as I did as a kid. I think if one ever gets complacent, creative growth would stop.

RVC: Your wife is an accomplished cello/violin player....do you sometimes play together?

DL: We have played a few things together. She had to stop playing professionally due to a playing injury. We have a CD that I may release at some point. It is kind of classical jazz fusion.

RVC: How do you describe in your words the acoustic piano versus electronic variant and keyboards as you play both?

DL: I look at them as all different instruments. I play the sound. You can have several different acoustic pianos and each will sound unique. One piano may make you play one way and another differently. As far as keyboards go, if you have two of the same keyboards the sounds and action will be pretty much the same. So that you do not sound like everyone else you have to tweak the sounds. As an improvising musician, I just take the sound I am using and make it work with what I am hearing with whatever instrument I have.

RVC: What would you recommend for the beginner – keyboard or a piano if space and affordability is not a constraint?

RVC:  Where all have you performed and plans ahead?

DL: I have performed in about 30 states in the US also Scotland, Wales, England and Poland and for BBC Radio One. For now, I will be just streaming online at https://www.facebook.com/davelatchawmusic until it is safe to play out again.

RVC:  Your hobbies and interests besides music?

DL: I am kind of boring. I am a complete music nerd. I really spend most of my day doing some kind of aspects of music. I do enjoy walking my dogs though. I try to get a couple of miles with them each day. But, on the walk I am usually thinking about music, creativity and improving my skills. I do also watch and read enough to try to have an idea of what is going on in the world. Even though I try to focus completely on music I want to be aware of the world.

RVC: Who would you like to jam with in the vast landscape of musical giants?

DL: The list is so vast I absolutely could not write down everyone that comes to mind. I will pick living players, and this is only at this moment in time.

RVC: Can a piano player also play the pipe organ (as in the church)?