CALL FOR UNITY AND BROAD FRONT….. 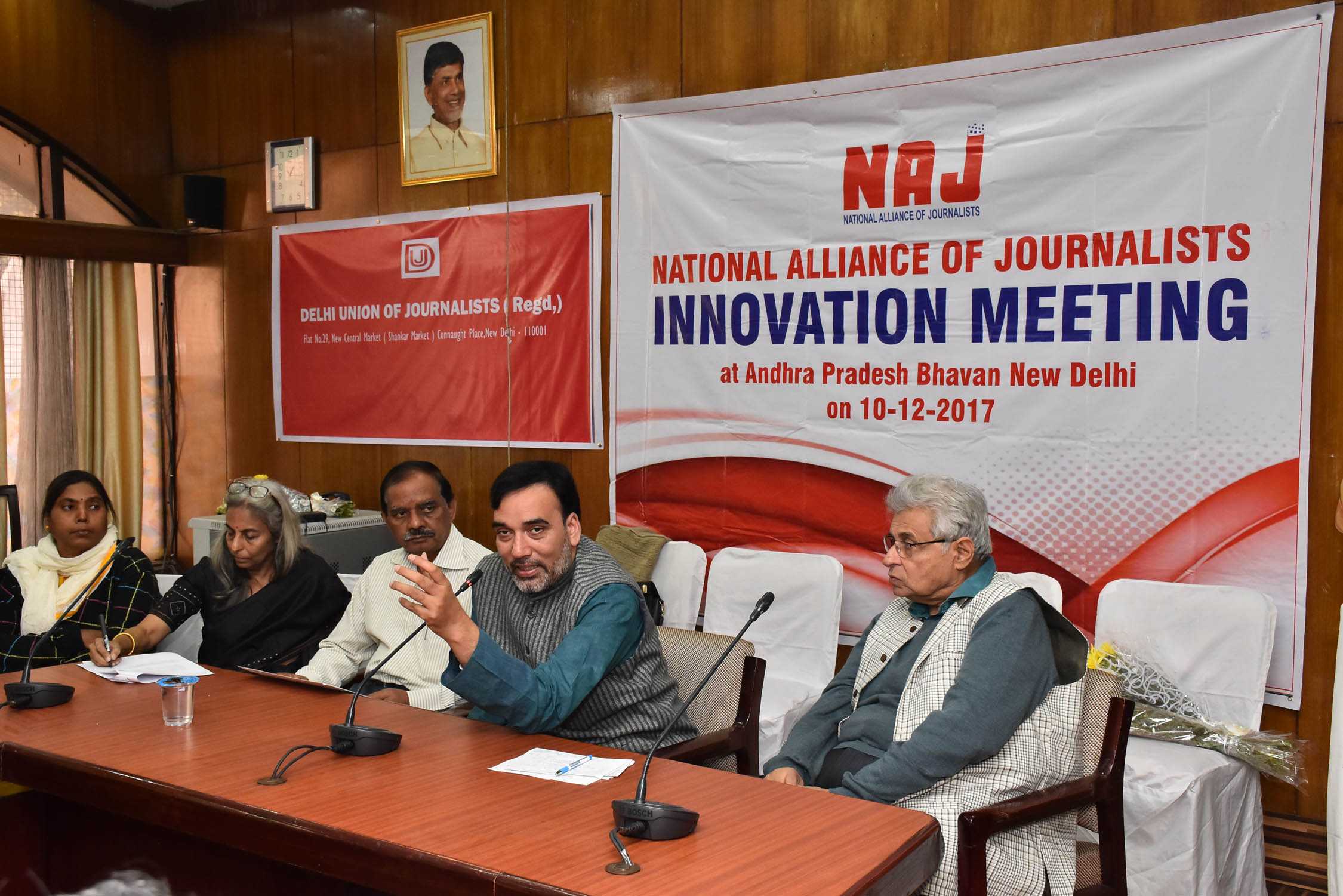 The National Alliance of Journalists (NAJ) demands that the Government of India appoint a National Media Commission to study the prevailing situation in the media and particularly the status and working conditions of journalists in print and broadcast media and the plight of Rural journalists and freelancers who have no monthly income or job security and no medical benefits or ESI or PF or pension. The biggest challenge that the journalists face is the lack of job security and the contract system. The NAJ demands that the Centre enact through Parliament suitable amendments to the Working Journalists Act to bring the entire media within its ambit, including the broadcast media.

The NAJ demands immediate disbandment of the Press Council of India which has become a toothless instrument. Instead, a Media Council, to include in its ambit the broadcast media, should be created replacing the existing Press Council of India. Also, instead of the Government deciding on its composition, the media bodies should be allowed to decide on the same encompassing both print and electronic media.

The meeting also resolved to support new wage board for print and electronic media as demanded by media bodies like KUWJ and DUJ among others, and also making non-implementation of the Majithia Wage Board recommendations a cognizable offence.

The meeting also expressed solidarity with the Confederation of News Papers and News Agencies Organizations meeting being held at Chandigarh simultaneously and wishes to join forces with them in future struggles on common demands. It welcomed coordinated functioning with the All India Newspaper Employees Federation. A committee for forging links with Central Trade Unions was suggested.

The meeting demanded implementation of a pension policy for journalists of the print and electronic media and press workers on the lines of Kerala with a share being collected from the Managements too.

The National Alliance of Journalists (NAJ) expresses its deep concern at the growing attacks on journalists in the country which amounts to attack on freedom of the media. It called for risk insurance cover and a national protection policy. This it felt was growing day by day and infact could require protection through legislation at par with government employees. It urged the Government of India to provide protection through legislation to working journalists in print and broadcast media, on par with government employees on duty, which will reduce attacks on journalists at the field level.

The meeting called for a new wage board /wage fixation machinery for the entire print and electronic media and suitable amendments in Parliament to bring the working journalists Act to the electronic media. A new wage board was overdue and necessitated continuous hearings and a time bound programme along with an early announcement.

The meeting earlier was inaugurated by the Delhi Labour Minister, Gopal Rai, who expressed solidarity with the NAJ and promised to work for the welfare of journalists. He touched on the Wage board Award and heard some complaints particularly regarding the missing DA listed in the Awards and non-implementation.

A mini National Gender Equity Council was formed at the meeting with Sujata Madhok as Chairperson and K Manjari of Hyderabad as co-chairperson. O Shanti of Vijayawada, G Anushree of Hyderabad, Shivani Sharma of MP and Mrinal Ballari of Delhi, were approved as initial members.