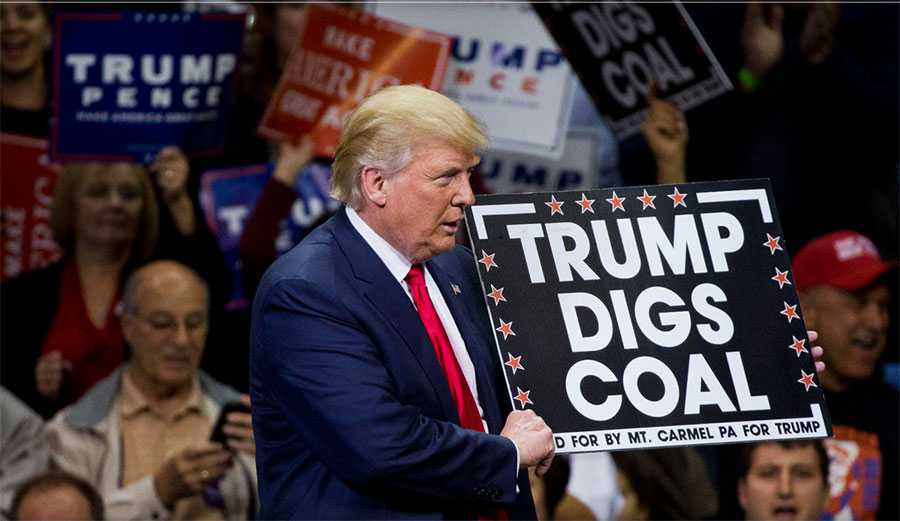 The Executive Order calls for an immediate reevaluation of the Clean Power Plan, the flagship initiative of the US to meet its emission reduction pledge. Lifts the ban on federal leasing of land for coal production; lifts restrictions on the production of oil, natural gas, clean coal, and shale oil and gas.

In his federal budget, Trump has already eliminated funding for UNFCCC and the Green Climate Fund. With this Executive Order and budget proposal, the US will fail to fulfill its commitments under the Paris Agreement. These actions of the Trump administration hit at the very foundation of the Paris Agreement; they trigger the process that could potentially dismantle the Agreement which was signed by 195 countries in 2015.

New Delhi, March 29, 2017: In a move which could potentially sound the death knell to the Paris Agreement on climate change, US president Donald Trump, on March 28, 2017, signed a sweeping Executive Order on ‘Promoting Energy Independence and Economic Growth’. The Order eliminates much of the already “modest” policies and initiatives started by the Obama administration to reduce fossil fuel consumption and greenhouse gas emissions in the US, says Centre for Science and Environment (CSE).

An analysis done by CSE shows that with this Executive Order, the US will fail to meet its commitments under the Paris Agreement. “As the US is, historically, the largest polluter, its failure to meet international commitments will unravel the Paris Agreement that was signed by 195 countries in 2015 to fight climate change,” says Chandra Bhushan, deputy director general, CSE.

Revokes the moratorium on coal mining on US federal lands. This is aimed to increase coal production and consumption in the US. The US is already the second largest coal consumer in the world after China. Its per capita coal consumption is five times higher than India’s.

It calls for immediate review of all rules and cancels, revises or revokes any rule or action that can potentially burden the development of domestic energy resources. This is aimed at increasing the production of all fossil fuel resources, especially shale oil and gas. This, when the US produces more gas than Russia and more oil than Saudi Arabia.

Revokes six previous Presidential Executive Orders on climate change issued by the Obama administration, including one on setting standards for carbon pollution from the power sector. The US power sector is a major emitter of greenhouse gases -- in 2015, it was responsible for emitting 2 billion tonne of carbon dioxide, more than what India emitted from all its economic sectors.

Initiates an immediate review of the clean power plan (CPP) initiative. CPP is a regulation that aims to reduce carbon dioxide emissions from US power plants by 32 per cent below their 2005 emissions level, by 2030. The CPP was the centerpiece of the Obama administration’s climate change initiative to meet the US’s modest commitments under the Paris Agreement to reduce GHG emissions by 26-28 per cent from 2005 levels, by 2025.

Earlier in the month, in its first federal budget, the Trump administration defunded most of the programmes related to lowering domestic GHG emissions and the scientific missions to study climate. For instance, it has decided to eliminate funding for CPP.

Most importantly, Trump has refused to fund the Global Climate Change Initiative, including the Green Climate Fund (GCF). GCF had been set up to help developing countries adapt to climate change and move to low-carbon technologies. One of the key attributes of the Paris Agreement is the commitment by countries like the US to provide financial support to developing nations. With the defunding of GCF and other international climate change-related initiatives, the US has gone back on its commitments to the Paris Agreement.

“With the new Executive Order and the budget proposal, Trump has shown that he does not believe in climate change and has decided to go back on his nation’s international commitments to reduce emissions and provide funding. The US, being the top historical polluter, should have been raising the ambition to address climate change. The Trump administration has instead attacked former President Obama’s climate action plan, vowed to make coal competitive and put fossil fuel-based economy on the top of its agenda,” says Chandra Bhushan.

The Paris Agreement was adopted on December 12, 2015 with the objective of limiting global temperature rise to 2 degree C and strive for 1.5 degree C by eliminating use of fossil fuels and replacing them with renewable energy sources. As a mandatory requirement, countries have submitted their nationally determined climate action plans to the UNFCCC. Under its climate action plan, US has pledged to cut its emissions by a weak target of 26-28 per cent by 2025 against 2005 levels.

“Trump’s move sets a bad precedent. Due to the US inaction, the onus will now fall on other countries to substantially scale up their ambitions to address climate change,” remarked Chandra Bhushan.

For more on this or for interviews, please contact Hemanth Subramanian, hemanth@cseindia.org / 9836748585.